It’s my second Sunday in Toronto. Today I had nothing really important to do except the laundry, so I decided to take a walk outside. It’s an exceptional warm day, a sunny gift of the Canadian unpredictable sky. Frequently I don’t have a destination, just a direction. Like today:  I am going West, following the unreachable horizon of Bloor West street,  bordering Down Town.  It really never minds to me where I go, because the most meaningless brick of this city is part of the Unknown. Everything is still unexplored. The mysterious Toronto smoothly assumes shapes and meanings whereas my feet takes me through the street lights, subway stations, groceries, along an uninterrupted line of ethnic shops. 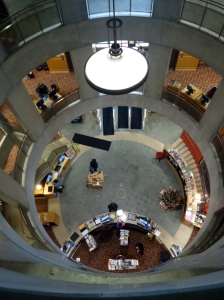 While I keep walking along Bloor West street, a quite disappointed  attitude grows in my thoughts: “So that’s truly Canada?”. A never ending line of shops,  all in rows as notes on a tab: KFC, Mc Donald, Subway, Tim Horton, Metro, Second Cup,  Timothy’s, instead of C,D,E,F,G,A,B!

My first impression of Canada is that of a playground built for the consumers: you can buy everything, as long as you can afford it.  But that’s not Canada, that’s Toronto. Although I am in the Canadian biggest city, I feel I could be everywhere else, in a future era in which I have been mysteriously teleported (or rather transported after a 15 hours flight on three different planes).

It feels like being in the very center of the world. I walk all alone and, at the same time, I am walking together with all the diverse people of the planet.

I have a secret pleasure in watching them walking on the street and  wondering about their lives, while I keep walking unnoticed amid the crowd. I say to myself: “So that’s how the people from Burma look likes… Oh, that’s an African albino … Look at that couple: a black man and an aboriginal woman walk together… if they will have a kid, is gonna’ be Canadian citizen or a First nation member? That’s a Buddhist monk, with a Rasta man and a queer he/she or both … where are they going all together? It’s almost 5 pm and we are after all in a British colony… maybe is the time for the tea ceremony in the gay Village, and after all we are in the transoceanic dominion of Queen Elizabeth II!”

With a single gaze I can grasp faces which belongs to worlds that I have always thought located at an unreachable distance between each other.  Estonia, Hong Kong, Jamaica, Portugal, Korea, Ethiopia, Burma, Bulgaria, Italy, China, Brazil, Singapore. I meet all this country in the faces of those who walk in front and beside me. How many other countries would I see if I could turn my eyes all around? Still, I cannot guess the ethnicity of the majority of the Canadians that encounter on the street. That’s the crazy post-racial city! Here diversity is welcomed, and cultures meet, hybridize and multiply on day to day basis.

Firstly, I thought to the Melting Pot, but I was wrong.  That is what happen in USA, where immigrants from every corner of the world, arrive in the States and are ought to leave their previous  identity out of the border to become, once for all, Americans. This is not the case for Canada. The Canadian federal government has officially adopted (Multiculturalism Act, 1988) a multicultural policy aimed to valorize cultural diversity within the national borders, and canadian citizens are allowed to have different passports.

In Toronto, one of the most diverse city of the world, a huge amount of the population has mixed identity, because migrated recently. “Italian – Canadian” “Asian – Canadian ” “Caribbean- Canadian”… the list should be a great deal longer for covering the 165 countries that are represented here. It seems everybody is “half – something – something”.

“Hamburger identities” this is the best definition a wise friend suggested me to call those people who feel at the same time from two countries and from no one. This is the city of the “hyphen identities”, where every identity is hybrid, to different extents. So I wonder, who can everybody be different and Canadian at the same time? This is the question I will answer in the following months of my staying in Canada.

Although I am in the multicultural hub of the Earth, I personally feel just like another Italian migrant of the many arrived here from Sicilia and Calabria, in the early 20th century.  I cannot connect with this city. Is too big, too rich, too much. The breath of my anthropological training impact with the narrowness of my provincial city background. Toronto is not Taranto, to me it’s just like a futuristic city from an Hollywood movies and I am just a Modenese who would always rather bike than take the bus.  Will I ever be able to feel a belonging to this metropolis? 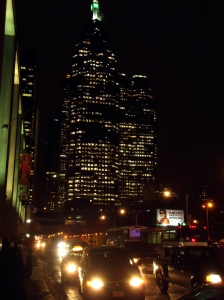 I cannot solve this doubt at the moment, so I keep walking. I want to get to know the greatness of North American, just walking instead of doing anything else, like something useful. As an Italian Forrest Gump, precipitated in an alien world, I will make my way through the tiniest inch of asphalt, the casual bar, the hairdresser,  the bakery , the vintage shop. While I am walking  all this fragments dance with me and any urban signal, any crossroads,  hints to the Whole in which all these things exists.  A Whole, to which I am slowly taking part, step by step.

This Sunday afternoon I fell for the first time the presence of the World at once . It’s here and is walking with me, right along Bloor West Street.  My pleasure increases step by step. I will never stop, I will never rest, I will just keep walking till everything will seem familiar like in my old city used to be.

I don’t care if some people told me that what I call pleasure is instead a mania. I even like how its name sounds like, dromomania.

5 thoughts on “Toronto Dromomania – Walking in the center of the world.”

Join us! Just waiting for your contribution:

Do you want to tell us about your last trip and share your pics? We are ready to post your articles, tales, pictures and poems!