I know, this weekend we made a mess.

“Even the Pope retired before Berlusconi” (allvoices.com)

I’ve not been particularly happy about the outcome of the elections in my country in the past twenty years, but today it really seems worse than usual. The country doesn’t have a clear majority in the Parliament. This is also due to the fact that many people decided to vote for Berlusconi again, even if his contribution to the financial crisis was clear to all the observers, especially abroad, even if I am sure that also most Italian people were aware of the damage he made to our country. But that doesn’t seem to be enough to stop this phenomenon to persist. 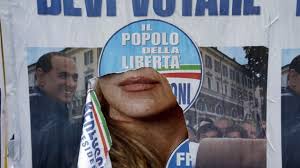 I cannot really say why it happened again. I can just try to give sociological explanations, considering that Berlusconi is very good at communicating, he seems to perfectly fit television media and he is incredibly good at taking advantage of popular topics – tax cut, for instance. On the other side, what I cannot really understand is why people never learn from their faults. Berlusconi, actually, never kept all the promises he made and he was elected for. Of course, I am trying not to mention all the shameful scandals he was involved in, and for which he didn’t resign but openly cheated in front of the country. Today, the distance between me and a part of my country has never been that large.

The fact that Berlusconi still maintained 20% of the electors seems to go back to a moral problem of Italy, not just a political one. We are a beautiful country, but we also have a “dark side” we cannot really get rid of. Maybe every nation has one, and this is our way to show it. It’s true that Berlusconi didn’t win the election in the end, but the fact he is still a key player in the Italian scenario it’s enough to cause a great concern in part of the public opinion.

As you should know from the news, the main issue now is that no party got a majority in the upper chamber. Our political system is not designed as in the U.S. or Germany, and it is hardly possible to govern Italy without the support of both chambers. Probably politicians will try to form a broader coalition government, but since the ideological distance among all the sides is quite large, this woud be a very unfavourable and instable unstable situation. We are also not like Belgium, and we can not afford to have no government for months.

Anyway, I advise you not to judge Italy too early. It’s a strange country, and sometimes it can reserve you quite a few surprises. The end of this story is still to be written. The outcome is unpredictable, since on top of all this a new party entered the Parliament this time. Of course, I am speaking about Beppe Grillo’s “Five Stars Movement”. We really don’t know what to expect from it. You may think that this movement has something in common with the Pirate Party in Germany, because it used the web to spread its message, to discuss proposal and to choose the candidates. But it is not mainly focused on free access to the internet or freedom of communication, as other web-parties are. It introduces itself as the expression of the protest against the old politicians, who supported or didn’t stop Berlusconi and led the country to the present situation. Beppe Grillo, a former comedian, is the main sponsor of the movement, and something like a “loudspeaker” of its political agenda, but he is not a candidate himself. He claims he wants to substitute the old ruling class with a new one; moreover, he is also pointing the finger at banks and the financial sector. Unfortunately, sometimes he has also shown a certain amount of Euroscepticism (even if he has never been totally clear on this point). In Italy, Five Stars is also the only party to seriously consider environmental issues.

Most of the people elected in the Five Stars Movement have no previous experience, therefore we don’t know whether to trust them or not. Personally, I’m not entirely sure we can. But I am convinced something will deeply change in this country after these elections: it’s enough to look at the composition of the new Parliament. We are well known to be a country ruled by the oldest politicians of Europe, and with strong discrimination against women – I cannot deny it. However, we are now about to have the youngest Parliament of our history: the average age in the low chamber is 45, and many new entries are 20s or 30s. The youngest is a women, she is 25 and has been elected in the FSM (for the whole party the average is 33). Plus, one third of our representatives are now women. The reason is again the success of the FSM, but also of the new candidates of the centre-left coalition.

What’s happening now in Italy should be relevant to all Europe. As I said at the beginning, we made a mess, but I hope we will also take advantage of the new energies that have risen from these elections. The votes to the Five Stars Movements at least show that many people are convinced that politics in this country has to be lead in a different way than before, and by different people. Maybe, I am too optimistic, but I can still see a light of hope.

My fear is that Euroscepticism could take over, and weaken our link to the EU, or compromise the integrity itself. I have been an Erasmus students, I have many friends around Europe and I have no trouble admitting that a unified continent is my political dream. I cannot really see Italy without Europe anymore. I hope that new people sitting in the Parliament will make these feelings prevail, and will be able to look ahead, instead of behind.

2 thoughts on “Italian Jam – a foreigner’s guide to elections”

Join us! Just waiting for your contribution:

Do you want to tell us about your last trip and share your pics? We are ready to post your articles, tales, pictures and poems!